Launch of the WHRD Toolkit

The launch was held at Redeemed Church in the Mathare settlement of Nairobi and was attended by WHRDs from various urban settlements, national and international NGOs, and representatives from the international diplomatic community and Kenyan authorities. PBI Kenya’s Coordinator Sabine Guenther welcomed the audience, explained how the idea of a Toolkit came into existence and set the scene for joint collaboration to address the needs of WHRDs in Kenya.

Andy Barnard, First Counsellor of the European Union Delegation to Kenya, gave the keynote address. He emphasized the EUs commitment to support efforts that aim to eliminate violence against women. On the issue of gender-based violence (GBV) he stressed that "It's about changing attitudes, not just implementing legislation". 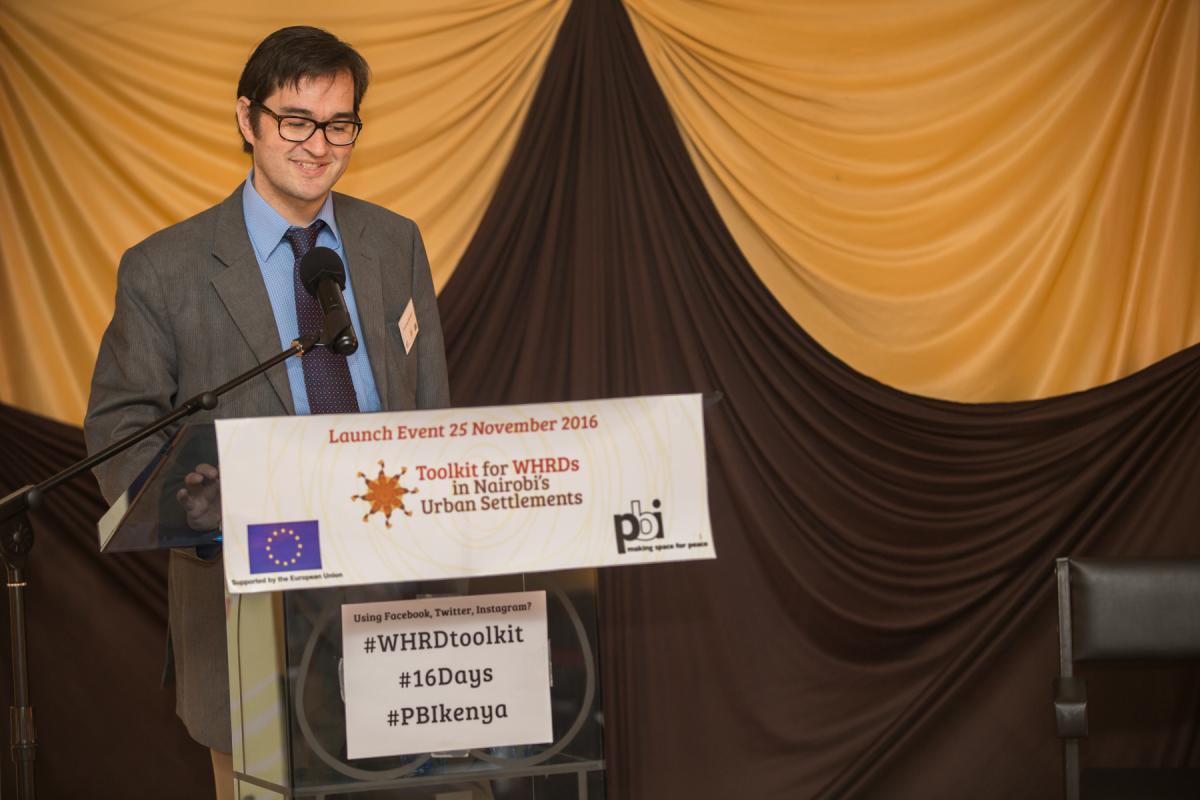 Following his address, Naomi Barasa (the consultant involved in the creation of the WHRD Toolkit), presented the Toolkit and unveiled the Toolkit website. She outlined the objectives of the Toolkit, highlighting the aim for it to become a living document that is locally owned. Additionally, she explained how WHRDs from the settlements and beyond can use the resources and contacts provided in the Toolkit. Lastly, she stressed the highly participatory and interactive process that led to the Toolkit's development, which included the participation of WHRDs, NGOs, Kenyan Authorities and other resource persons in a large number of workshops, interviews and discussion groups.

The stage was then given to three courageous Women Human Rights Defenders to talk about their experiences as WHRDs in the settlements. Anastasia Wakonyo from Mukuru, Ruth Mumbi from Mathare and Lydia Kemuma from Kibera gave valuable insights into their daily work and struggle as defenders and community activists. They mentioned the importance of being recognised as a WHRD and how lack of recognition negatively impacts their security. Their powerful and often personal accounts stressed the detrimental psycho-social effects that their work can have on their well-being and hence in essence on their security. Despite the negative impacts, the WHRDs successfully demonstrated their unwavering dedication, passion and energy through their personal accounts and their collective outbursts of song and dance which brought the entire audience to their feet.

To ensure that the Toolkit is disseminated widely, is locally owned and continues on as a living document, we are looking for women human rights defenders from the urban settlements to serve a one-year term as Toolkit Organisers (TOs). The TOs, with support from PBI Kenya, will take the lead on the dissemination of the Toolkit in Nairobi’s urban settlements.

To read an article by the European Union Delegation on the WHRD Toolkit Launch please click here.